It was a quieter fall season of college golf, especially on the women’s side.

Just 45 Division I women’s teams teed it up enough to be ranked entering the spring, including every member from the SEC and Big 12 conferences. However, absent were a number of NCAA title contenders. While nearly all the top men’s championship favorites played in the fall, the women’s game saw Wake Forest, USC, Arizona State, UCLA and Arizona delay the start of their seasons to the spring along with the rest of the ACC, Pac-12, Big Ten and many other conferences.

But everyone is back, and the race to Grayhawk should be an exciting one, even if the ongoing COVID-19 pandemic will continue to make things difficult.

That road to the NCAA Championship will begin – or continue – for many teams in the Sunshine State, as Michigan State and Michigan will face off in a match Jan. 17 in Naples. At the end of the month, Wake Forest will highlight the UCF Challenge field in Orlando. Purdue moves its Puerto Rico event to Sarasota in early February, with the likes of Oklahoma State and Georgia entered. And in mid-February, several top teams, including South Carolina, will play the Moon Golf Invitational in Melbourne. 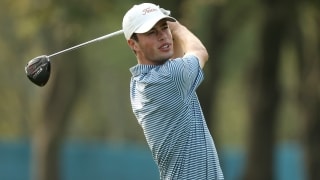 GolfChannel.com ranks the top 30 teams and players in the country, and provides a closer look at the Power 5 conferences and top mid-majors.

There are a few notable spring staples absent from the schedule, including the Northrop Grumman Regional Challenge in Palos Verdes, California, and Darius Rucker Intercollegiate in Hilton Head Island, South Carolina (South Carolina will instead host a similar field in Columbia). The Pac-12 Preview, normally played in Hawaii, moves to Scottsdale, Arizona.

Another difference from the men will be the Player of the Year race. While the Haskins Award battle has no clear frontrunner, a couple of players have already started to build strong Annika Award resumes. Baylor’s Gurleen Kaur won twice in the fall while Arkansas’ Brooke Matthews won once and added a second. South Carolina’s Pauline Roussin-Bouchard also has a victory and arguably could be the betting favorite to win if there was such a prop.

To get you prepared for the spring season in college golf, which begins this weekend, GolfChannel.com sought insight from dozens of coaches to rank the top 30 teams and players in the country, as well as provide conference breakdowns for the Power 5 conferences.

What to watch: This could be the best Wake Forest team we’ve seen in a long time. Four players – Emilia Migliaccio, Rachel Kuehn, Siyun Liu and Lauren Walsh – are ranked No. 42 or better in WAGR and all should be mainstays in the lineup. The fifth spot has some great options, too, in freshman Mimi Rhodes and veterans Vanessa Knecht and Letizia Bagnoli. Knecht is battling a hip injury, though. … The loss of Ana Belac will hurt, but Duke still has some potential All-Americans in Jaravee Boonchant and Gina Kim, while Erica Shepherd should break out after an average freshman season. The last lineup spot is a slight concern. … Florida State will be strong at the top in Beatrice Wallin, but the Seminoles will need a player or two to step up this spring if they want to challenge Wake Forest or Duke. Freshman Charlotte Heath should make an immediate impact. … Virginia struggled mightily last season, which ended in a last-place finish at the Darius Rucker, but the Cavaliers have the talent to be much better. Virginia Bossi is a first-team All-ACC candidate. … Emily Mahar bolsters an underrated Virginia Tech team after posting six top-12s last season. … Speaking of strong No. 1’s, Louisville’s Lauren Hartlage returns for an extra year after being named an honorable-mention All-American as a senior and North Carolina’s Jennifer Zhou is almost inside the top 100 in WAGR. … Clemson still has Ivy Shepherd, but the loss of Ana Paula Valdes will sting.

What to watch: Texas struggled in the fall against its mainly Big 12 competition, but the Longhorns still remain the favorites to win a fourth straight conference title because of the return of Agathe Laisne and Sara Kouskova, who both sat out the fall. … Baylor took advantage of a shorthanded Texas by winning three times in the fall while Gurleen Kaur is in the Annika Award conversation thanks to two individual victories. … There are some strong one-two punches in this conference, including Oklahoma State’s Isabella Fiero and Maja Stark, the latter of whom missed the team’s first two fall events but is now back on campus. … While the Big 12 probably has three potential conference champions, Oklahoma could make it four thanks to the arrival of Hannah Screen, who sat last spring after transferring from Houston and led the team with three top-10s in the fall. … Texas Tech has one of the Big 12’s best players in Sofia Garcia, but the Red Raiders need some more help.

What to watch: There’s no more Allyson Geer-Park, but Michigan State retains much of its special team from a season ago. Valery Plata, Yurika Tanida, Paz Marfa Sans and Haylin Harris form a great core while adding Valentina Rossi to the mix will help offset Geer-Park’s departure. … Ohio State is ineligible to play in the NCAA postseason, which is unfortunate considering the talent on this team. Aneka Seumanutafa really has the game to take off even more this season while freshmen Kailie Vongsaga and Jillian Bourdage are welcomed additions. … Northwestern’s top three of Brooke Riley, Kelly Sim and Irene Chen are as good as anyone in the Big Ten, but the Wildcats’ Big Ten chances likely rest on whether they can get a consistent fifth scorer. Freshman Jieni Li is one of two Chinese players who may not be able to get back to campus for the spring. … Illinois has the players to win this league, though they underperformed at times last season. Kornkamol Sukaree and Tristyn Nowlin do provide nice stability atop the lineup. … No player in the Big Ten is ranked higher in WAGR than Indiana’s Priscilla Schmid (44). … Patrice Mackova’s addition at Maryland gives the Terps another reliable option behind Virunpat Olankitkunchai and Xiaolin Tian. … Freshman Monet Chun’s arrival could be final piece for Michigan to take the next step.

What to watch: USC had won two straight events before last season was canceled, but the Trojans return their entire lineup from that squad this spring, including senior All-Americans in Gabriela Ruffels, Amelia Garvey, Allisen Corpuz and Alyaa Abdulghany. There is finally competition from outside the top five, too, as those aforementioned players and junior Malia Nam will have to hold off Pepperdine transfer Alexa Melton and freshman Brianna Navarrosa in qualifying. … Arizona State will be playing inspired golf this spring after head coach Missy Farr-Kaye was diagnosed with colon cancer. Farr-Kaye plans to coach this spring, and she’ll have quite the team led by Linn Grant, now the No. 2 amateur in the world, and veteran Olivia Mehaffey. … Despite having one of the youngest teams in the country last season, UCLA posted five top-4 finishes. Now, the Bruins are a little more seasoned behind sophomores Emma Spitz and Emilie Paltrinieri while also welcoming in top recruit Alessia Nobilio from Italy. Spitz had seven top-11 finishes last season. … Arizona shouldn’t be counted out as long as the Hou sisters are in Tucson. … Like its men’s team, Stanford won’t have its players on campus until mid-February, but by the end of the spring this team should be in the conversation as Angelina Ye and Aline Krauter are joined by some talented freshmen in Sadie Englemann and Rachel Heck. … Oregon is a sleeper team thanks to incoming freshman Cynthia Lu. … Rino Sasaki provides a veteran presence atop Washington’s lineup.

What to watch: South Carolina entered the fall as a national-title contender, and the Gamecocks looked like one, placing third at Blessings, winning The Ally and finishing runner-up at East Lake Cup. They also will be better this spring as Ana Pelaez, the world’s No. 33 amateur, returns to the lineup after skipping the fall. Pelaez should slot between Kent State transfer Pimnipa Panthong and Annika Award contender Pauline Roussin-Bouchard in what is a deep lineup. … Ole Miss dazzled at East Lake behind the play of Kennedy Swann and Ellen Hume, the latter of whom is coming off a winter win at The Sally. Senior Julia Johnson rounds out a very talented top 3 for the Rebels, a team built for match play. … Auburn opened the fall with a disappointing T-7 finish at The Blessings, but that came with a shorthanded lineup missing Meghan Schofill. The experienced Tigers, with Schofill in the lineup, rebounded with a third at The Ally and win at the Liz Murphey, though the latter event didn’t include South Carolina, Ole Miss and Florida. … LSU has one of the best players in the nation in Lindblad, but the Tigers need more from the bottom of their lineup if they don’t want to repeat similar performances as their 10th-place showing at Georgia. … Georgia could be a dark horse, as Caterina Don is entrenched atop the lineup and there are some other talented freshmen who could break out. … Florida remains in the mix thanks to a balanced squad led by senior Addie Baggarly. … Alabama adds talented freshman Benedetta Morseco to the fold this spring, which could give the Tide a huge boost. … Arkansas won its home event by 18 shots before finishing the fall T-9, T-8. The Razorbacks are strong at the top, though, with Brooke Matthews. … Auston Kim is planning to return to Vanderbilt’s lineup this spring, which makes the Commodores part of the conversation in the SEC.